Uncover the "Where" for every "What"

The relationship between cells and their relative locations within tissue is critical to understanding normal development and disease pathology. Spatial transcriptomics is a groundbreaking molecular profiling method that allows scientists to measure all the gene activity in a tissue sample and map where the activity is occurring. Already this technology is leading to new discoveries that are proving instrumental in helping scientists gain a better understanding of biological processes and disease.

Spatial capture technology powers the Visium Spatial platform through the use of spatially barcoded mRNA-binding oligonucleotides. There are two methods for how mRNA molecules get a spatial barcode.

In fresh frozen tissues, the tissue is fixed and permeabilized to release RNA which binds to adjacent capture probes, allowing for the capture of gene expression information. cDNA is then synthesized from captured RNA and sequencing libraries prepared.

In FFPE tissues, the tissue is permeabilized to release ligated probe pairs that bind to adjacent capture probes on the slide, allowing for the capture of gene expression information. Pairs of probes specific to each gene in the protein-coding transcriptome are hybridized to their gene target and then ligated to one another. The probe pairs are extended to incorporate complements of the spatial barcodes and sequencing libraries prepared. 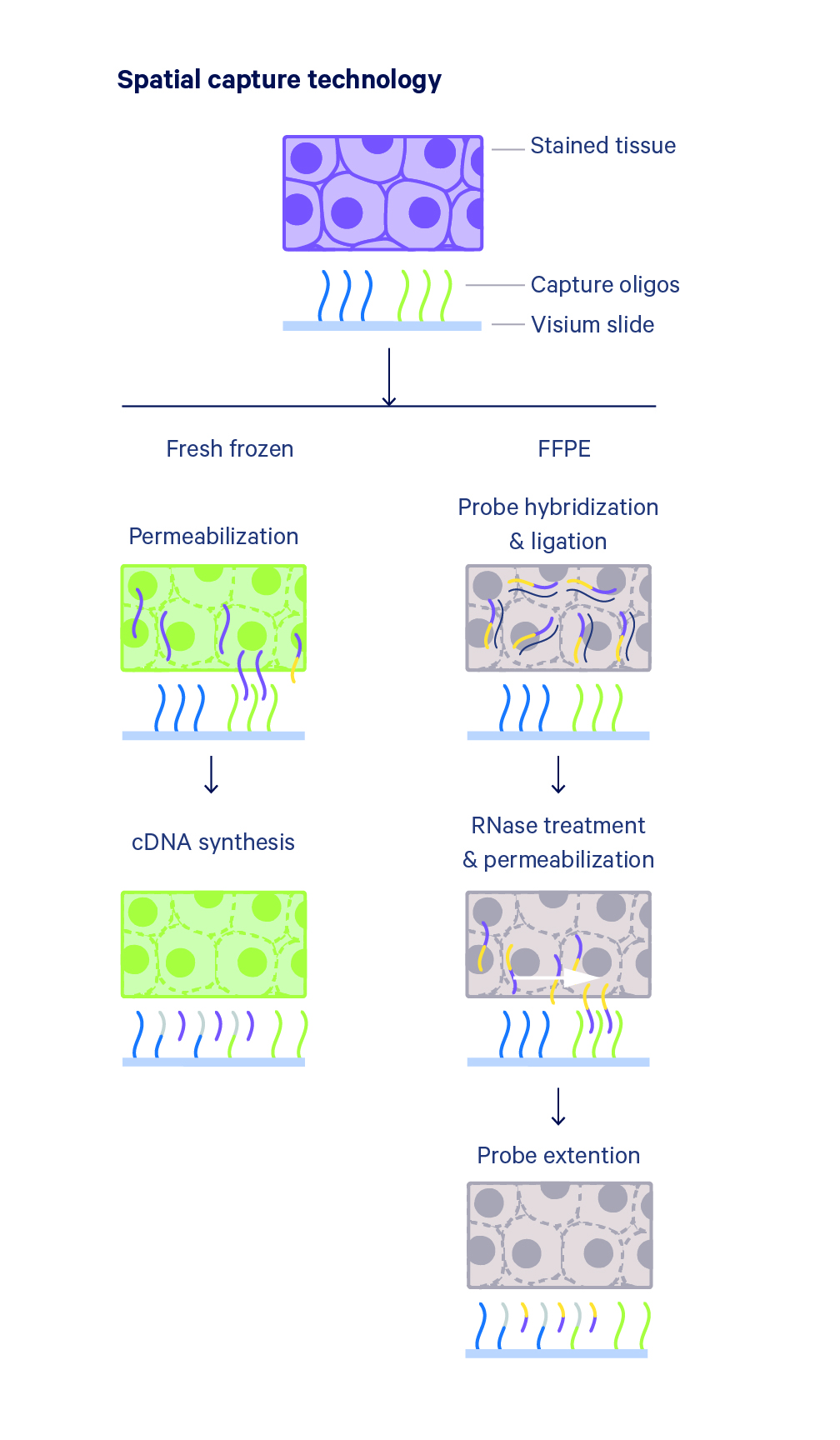 Examine gene expression in the context of the tissue microenvironment

Innovation in spatial transcriptomics methodologies is enabling scientists to get a holistic understanding of cells in their morphological context. In this presentation, you will hear first-hand from 10x Genomics scientists about groundbreaking improvements to the technology and exciting applications showcased by users.

The data generated by spatial capture technology allows you to choose any gene of interest and display its spatially resolved expression on the original tissue section. Since the whole transcriptome is measured, you are not limited to visualizing only a single gene. You can choose any number of genes in any combination to view and analyze together.
Play with the data visualization and table below

Use the sliders under the tissue image to adjust how you visualize and combine the tissue image and the gene expression data. Colors represent clusters identified by differentially expressed genes.